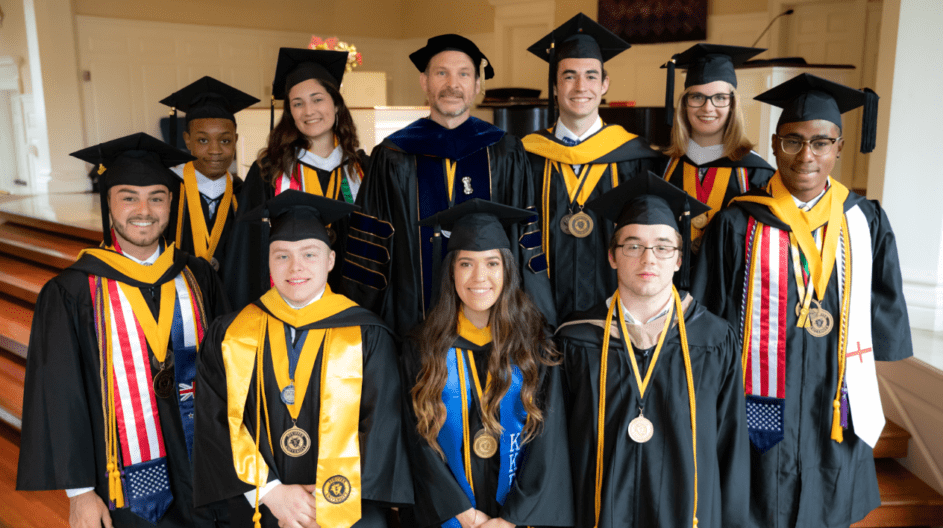 Sam Baden ’19 is attending the Lincoln Memorial University-DeBusk College of Osteopathic Medicine with the goal of becoming a D.O. specializing in pediatrics. As a biology major at Pfeiffer University, he augmented his studies with several independent research projects.

“The extra research I did at Pfeiffer helped me transition into medical school more easily than my classmates who also came straight from their undergraduate educations. My research at Pfeiffer taught me how to manage independent learning, which is a crucial part of medical school,” Baden said. “I now feel exceptionally well-equipped to research my patients’ presenting complaints and present my findings to my professors and peers at DeBusk.”

Tori Jackson Print ’18 pursued independent research in addition to majoring in accounting and business management and leadership at Pfeiffer University. She’s now a Senior Accountant at Nationwide Mutual Insurance Company where she’s working with automation-enabling programs and writing code to automate once-manual tasks at the firm. The work is part of a cutting-edge initiative called Robotic Process Automation. She also operates a tool that allocates expenses across all of Nationwide Mutual’s various business units.

Research isn’t part of a typical workday for Print, but the skills she developed as a Pfeiffer researcher are. These skills include “asking the right questions, finding answers quickly and communicating clearly,” she said recently. “I feel confident that I can succeed at a huge Fortune 100 company as an accountant specializing in automation and analytics.”

Print and Baden are among the alumni of Pfeiffer’s Undergraduate Honors Program,* which provides multiple opportunities for its participants to pursue independent research within the Honors Residential College, a Living-Learning Community.

Honors students, all of whom have gained eligibility for the program by compiling a weighted GPA of 3.5 or higher in high school, undertake a different independent research project each year, beginning in their sophomore year. Each student researcher works with a professor on producing a paper and on presenting key findings on a poster at an honors symposium.

The first research project that an honors student undertakes is unrelated to his or her major. After that, the research projects are confined to and build on the base requirements for a major, reflecting a process that has become “more curricular-driven,” said Dr. Michael Thompson, who has directed the Undergraduate Honors Program since the 2010-11 academic year.

“We wanted a process where students could build toward a stand-alone senior thesis and receive academic credit on their transcripts,” he said. “That evidence would better help them to tell the story of their honors experience to graduate and professional programs and to first employers.”

Over the years, honors students have been able to tell many remarkable stories about their research, whether it culminated in a senior thesis or not. Sometimes, they showcase their work at conferences for honors programs at schools in a particular geographic region. During his sophomore year, for example, Baden showcased a composition for solo piano at a conference. This was derived from his study of musical styles and the ways in which different pieces of music were composed.

Other research topics have run the gamut. Some examples include:

The subject of each research project is determined by the student, which pleases Landon Orrand ’23, an honors student who’s pursuing a B.A. in elementary education and visual communications.

“It lets you decide what you’re interested in,” she said. “It’s more beneficial if, as is often the case, you know it’s something you’re going to utilize down the road.”

That certainly was the case for Allison Lindsey ’18, who’s finishing up her second year at the Herbert Wertheim College of Medicine of Florida International University.

The research she did her senior year focused on protein degradation and its relationship with time of death. She worked with Dr. Laura Reichenberg, an associate professor of biology at Pfeiffer, to come up with a protocol to use desmin, an intermediate filament protein in muscle tissue, as a marker for establishing a postmortem interval. They tested the concept using chicken breast and, then, pig tissue.

Along the way, Lindsey learned many things that she has used in medical school.

“On a basic level, it taught me laboratory techniques that I am expected to know and get tested on,” she said. “It also taught me how to present scientific research on a variety of levels, which has helped me become adept at explaining complex medical problems to patients with different base amounts of knowledge. I learned how to effectively communicate with faculty to work towards a common goal and how to conduct research in a systematic way.”

Research and its benefits are just some of the reasons to become an Undergraduate Honors Program student at Pfeiffer University. Several honors students interviewed for this article also extolled the virtues of the Living-Learning Community (LLC). This keeps honors students connected in several ways, including requiring the non-commuters among them to take up residence in Cline Hall.

The LLC format became a principal component of the honors program at Pfeiffer in the 2014-15 academic year. Thompson said that students in his inaugural honors class had been pushing for it because “the experience in honors was largely in isolation,” he said. “They felt like they did not know the other students in the program and craved opportunities to share ideas with those who shared their experiences.”

Since LLC was introduced, honors students have been welcomed immediately into a community of learners that “provides support that students need to challenge themselves and to succeed,” Thompson said.

Alexis Speaks ’19, a former honors student who’s starting a business in her native Winston-Salem, thrived in the LLC environment.

“Living in Cline was truly a wonderful experience,” she said. “I was able to talk with upperclassmen and learn from their advice on what to do and what not to do. And because people in my own year lived together and took many of the same classes, we could keep each other on task and accountable.”

Jesse Print ’18, the husband of fellow honors participant Tori, is working in sales operations at CAS, a division of the American Chemical Society. He lived all four years of his Pfeiffer career in Cline Hall, serving as an RA and, later, an RD. Because of the LLC component, honors students “would study together, attend events together, and support each other in sports and other endeavors constantly — to the point where (we) really felt like a giant family,” he said. “Without it, all of the idea sharing and emotional and mental support through shared challenges would not have occurred so readily.”

Ability, as manifested by a high GPA, isn’t the only factor in a student’s successful honors program experience. A willingness to invest time and effort in studies is also important.

“At first, I wasn’t going to do the program because of how much extra work I thought it would be,” Dyer said, recalling how she felt when she received an email about it. “But, after looking more into it, I saw it as an opportunity to grow in my academics and researching skills while being able to learn about subjects that I enjoyed.”

The payoff of that hard work, many program alumni would tell her, is absolutely worth it.

*In early September 2021, the Undergraduate Honors Program at Pfeiffer University will begin considering applications from eligible rising freshmen who are seeking admission to Pfeiffer for fall 2022. To learn more about the application requirements, click here or email questions to [email protected].