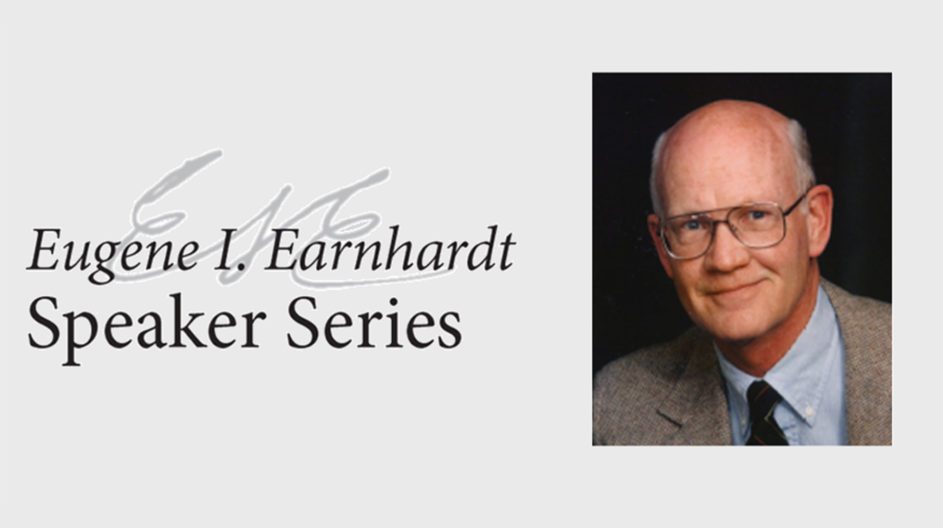 Earnhardt arranged for many historically important figures to speak at Pfeiffer, where he taught for 30 years. The Eugene I. Earnhardt Speaker Series, made possible by a gift of the Earnhardt family, will feature LaNier as its inaugural speaker on March 21, at 10 am in Merner Gymnasium on Pfeiffer University’s Misenheimer, N.C. campus. The event is free and open to the public.

“Pfeiffer College offered the perfect setting for a young history professor’s passion and the college mission to widen students’ worlds,” said Barbara Earnhardt, Gene’s wife, a Professor Emerita of Writing at Pfeiffer. “From 1966 to 1996 Gene devoted himself in and out of the classroom to linking the past with deepening the understanding of the present.

“Gene would be modest about this idea to use his name, but he would be so pleased with the program’s intentions. As his wife of 60 years, I am delighted for him — and his three sons are proud.”

Dr. Juanita Kruse, a Professor of History at Pfeiffer during much of Gene Earnhardt’s tenure there, called him a wonderful colleague who “gave everything he had to the University, as did Barbara.”

“His students and I still talk about him on Facebook,” Kruse said. “The series is a well-deserved honor.”

The series’ principal organizer is Dr. Michael Thompson, a Professor of History at Pfeiffer who is also the Dean of the University’s Undergraduate College and the Director of its Honors Program.

“We thought a speaker series connected well with Gene’s knack for bringing in speakers who either interacted with students in his history classes or spoke to a general student audience,” he said. “It’s a fitting tribute to what he did when he was faculty here.”

Dr. Margaret Earley Whitt ’68, who was profiled last November in Forever Falcons, recommended that LaNier kick off the series, which she called “a brilliant idea.” Whitt was greatly influenced by a 1968 talk that Gene Earnhardt organized at Pfeiffer by James Robertson “Bob” Jones (1930-1989) when Jones was the Grand Dragon of the North Carolina Knights of the Ku Klux Klan.

Whitt taught English for 27 years at the University of Denver (DU) until 2009, when she retired as a full professor. She is an expert on the Civil Rights Movement and the short fiction it inspired, and she arranged for LaNier, a Denver resident, to speak to her DU students several times. The Pfeiffer engagement of LaNier, the youngest of the Little Rock Nine, coincides with the 65th anniversary of Central High’s integration.

Thompson said that the Earnhardt series will bring at least one guest speaker to Pfeiffer each academic year. Speakers may also converse with smaller groups of students before or after their lectures.

Thompson said that the series’ ultimate aim is to introduce the Pfeiffer community to people who, like LaNier, have a “real-life connection” to history or to contemporary events.

“We want to make certain that students are challenged to think critically and to think beyond the confines of their classrooms,” he added. “Gene embodied that ideal at Pfeiffer.”

John Earnhardt, one of Gene’s three sons, said that Pfeiffer gave his father “that perfect platform to bring knowledge and perspective of history to his students.”

“He agreed with the sentiment that ‘if we don’t know history, we are destined to repeat it,’ he added. “So, he took history as a high-calling and a way to bring the past to life and make it relevant to the present and the future. A speaker series allows his legacy on campus to continue through hearing from newsmakers and primary sources.”

“We are very fortunate to have her,” he said. “Dad would want the spotlight on her.”

The Eugene I. Earnhardt Speaker Series Endowment will fund LaNier and future guests. Gifts can be made in support of the endowment at donation – Pfeiffer University (note Earnhardt Endowment as the designation).