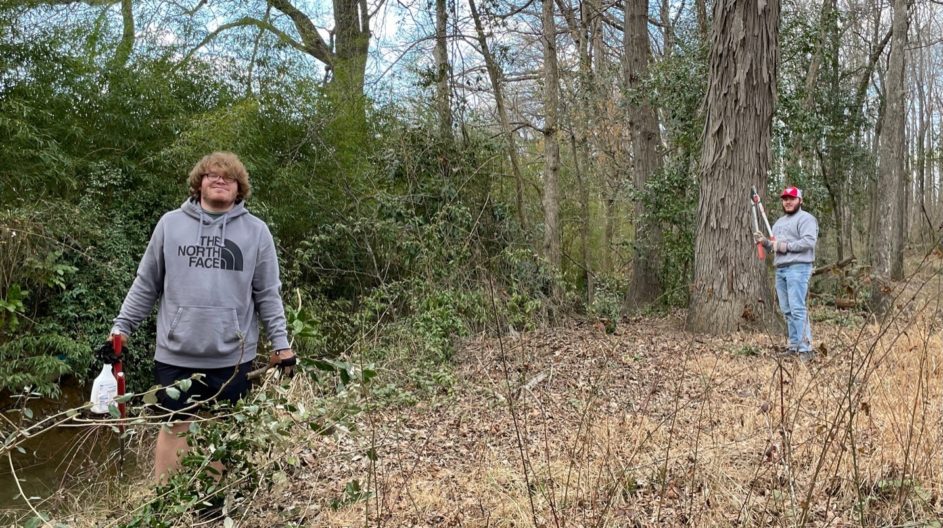 The annual meeting of the North Carolina Native Plant Society, to be hosted by Pfeiffer University on June 11, will showcase efforts by Pfeiffer students to remove invasive plants on the Misenheimer, N.C. campus and replace them with native ones. It will also draw attention to native plants that have been incorporated into campus landscaping.

“I’m teaching my students about invasive plants, how they endanger our ecosystem and what can be done to address that,” said Dr. Carrie DeJaco, Associate Professor of Biology and Environmental Science at Pfeiffer. “We’re being proactive, both in our actions on campus and in educating future generations. Hopefully, having the society’s meeting at Pfeiffer will inspire its attendees to take more action of this kind across the state.”

DeJaco, an active society member, began teaching at Pfeiffer in 2017, having earned a doctorate in ecology from the University of Illinois Urbana-Champaign. She was interviewed about invasive plants on a recent episode of a podcast called The Backyard Naturalists. She called invasive plants a “hugely problematic” issue about which too few people are aware.

Invasive plants (usually plant species that are native to Europe or Asia) often originate as landscaping items sold in garden centers of big box stores. In many instances, invasive plants escape the confines of a private landscaping project: Birds eat the fruit that these plants produce. Then, they fly off into forests and excrete seeds that germinate into invasive plants.

Once in the wilds, invasive plants alter the soil chemistry in a way that prevents native plants from being able to use the nutrients that they need. The population of bugs decreases because there is less of the right plant food for them to eat. The species whose diets are dependent upon the bugs, including birds, lizards and frogs, are then affected by the altered bug population.

“If we don’t have enough bugs, we start losing many species because there’s not enough food for them,” DeJaco said. “Once the invasive plants move into our wild areas, it really destroys the food web and the entire structure of the ecosystem.”

DeJaco and her students have been mounting an aggressive response to this situation at Pfeiffer, and meeting attendees will be taken on tours to see what they’ve done.

Each semester, DeJaco and her students remove invasive plants from the riparian zone along Curl Tail Creek, which the Falcon Trail follows downstream from campus into the town of Richfield. She described planting native plants to counter “a significant invasion of the understory along the creek” by such invasive species as kudzu (which originated in Japan), Japanese privet, Chinese privet, and autumn olive.  In the greenhouse on campus, she is currently growing from seed more than 20 species of native plants, such as red buckeye and white wood aster, to use in restoring the riparian area.

Also, in spring 2020, as part of a course called Reconciliation Ecology, DeJaco and her students embarked on a semester-long project to transform a ditch with riprap into a native pollinator rain garden, which is located along a sidewalk just east of Harris Science Hall Annex. After securing permission from Pfeiffer’s Facilities Department, they removed the rocks from the ditch and replaced them with native plant species they selected that would work well in that area, based on the soil and sun exposure.

“We’ve increased both the beauty and the function of that area,” she said. “We have a nice flower garden there instead of a ditch full of rocks.”