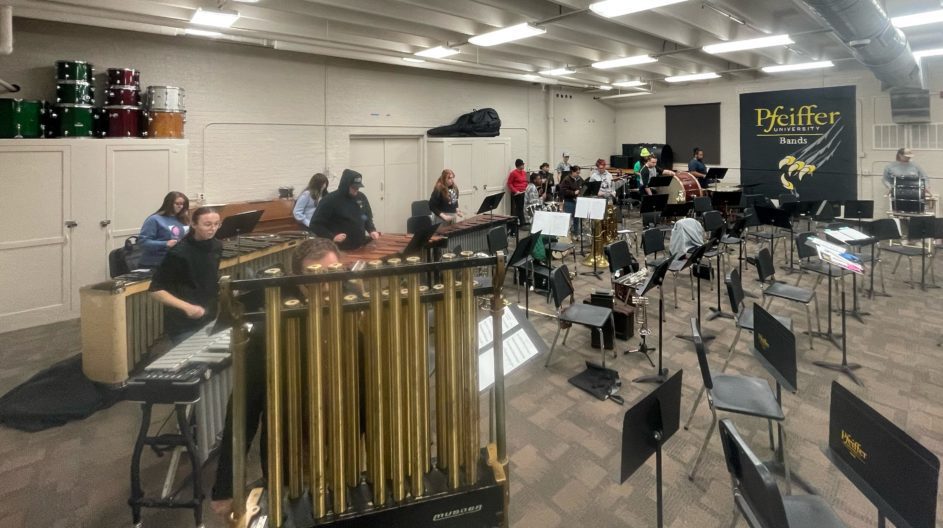 Dr. Joseph Earp, Assistant Professor of Music at Pfeiffer University, believes that music can conjure images of the alarm bells, heat, crackles, explosions, mayhem, and firefighting of the biggest blaze. So, he composed Five Alarm Fire for Percussion Ensemble, which the Pfeiffer University Wind & Percussion Ensemble will premiere April 26 under his direction at the Stanly County Agri-Civic Center in Albemarle, N.C.

Earp, a prolific composer, described lots of fiery features in his latest work.

“There are alarm bells happening in passages for mallet instruments,” he said. “Brass drums and tenor drums are making big booming sounds that make you feel like you’re in the middle of a ferocious fire. It’s chaos, but it’s organized chaos because the firefighters know what they’re doing.”

“It doesn’t really slow down; it stays up-tempo the entire time,” he said. “There’s a lot going on but there’s not so much going on that the listener is going to be lost. Hopefully, they’ll be sucked into it.”

Like an actual five-alarm fire, Earp’s composition calls for “all hands on deck.” Many of the Wind & Percussion Ensemble’s 21 musicians are learning to play percussion instruments during weekly rehearsals of the piece, including Evan Addison ’22, whose principal instrument is trumpet.

Addison, an Environmental Science major who hails from Southport, N.C., is playing the marching bass drum part in Five Alarm Fire, and he played tom drums during the Wind & Percussion Ensemble’s performance last fall of Hatsui Sunrise, another Earp piece for percussion ensemble.

“It is cool to be on a percussion instrument after being a wind player for so many years,” said Addison, who began playing trumpet in the sixth grade.

Where: Stanly County Agri-Civic Center, 26032 Newt Rd # B in Albemarle