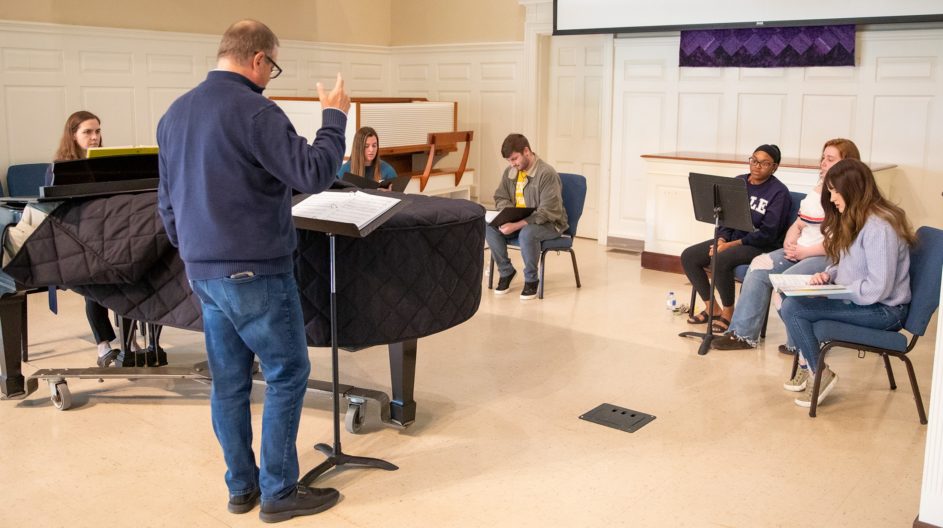 A clever play on words underpins the thematic concept of the next concert by the Pfeiffer University Singers.

The program, which Joe Judge ’87 will lead April 24 in Henry Pfeiffer Chapel, is titled “A Canon of Praise.” The Eastertide performance, which will take place in the 50-day period of celebration between Easter Sunday and Pentecost, reflects the fact that the word canon has two musical definitions.

A canon is a compositional technique “based on the principle of strict imitation,” in which an initial melody is imitated in one or more parts. Think “Row, Row, Row Your Boat” or the late Natalie Sleeth’s A Canon of Praise, a three-part oft-performed gem that will highlight the singers’ “Canon” program. Sleeth’s Canon has been praised for its “exquisite rhythmic and melodic charm” and for being fun to learn.

A canon is also defined as a collection of musical pieces. Judge, Pfeiffer’s Director of Vocal and Choral Music, calls the collection for the April 24 concert “pieces of praise.”

“It is primarily sacred music,” he said. “It tells a sacred story.”

Said story will be grounded in very eclectic fare, ranging from the 16th century to contemporary times. The contemporary offerings will include Songs from Silence, Elaine Hagenberg’s sonically rich, heavenly setting of texts by Brian Newhouse. Songs was dedicated to the choral community “in the hope of healing during times of silence and distance.”

The 16th-century material comes courtesy of Richard Farrant’s Hide not Thou Thy Face from Us. This boasts a Lenten mood in which “we confess our sins and pray, ‘Don’t turn away from us, God,’” Judge said.

The concert will also feature several eternally popular pieces, ranging from “Va,  pensiero,” the chorus of the Hebrew slaves from Verdi’s opera Nabucco to John Ness Beck’s arrangement of “Amazing Grace.” The latter consists of unison singing accompanied by a piano part that takes an improbable bluesy turn.

Judge said he’s designed “A Canon of Praise” with the aim of listeners taking in its full sweep.

“I want there to be a sense of a musical narrative,” he said.

What: Under Joe Judge’s direction, the Pfeiffer University Singers will present “A Canon of Praise”