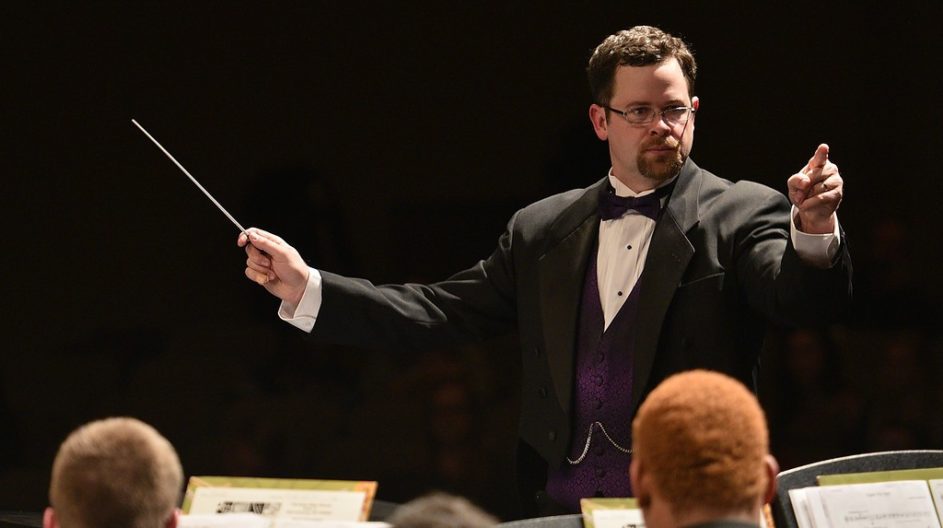 Pfeiffer Brings Back the Bands and Music Ed

In late August, the new Pfeiffer University Wind & Percussion Ensemble began rehearsing each Monday evening for a concert on Nov. 2 in Henry Pfeiffer Chapel. The formation of the group is one of several steps that Dr. Joseph Earp, its director, is undertaking to reinstate the music education major at Pfeiffer beginning in the fall of 2022.

“Any program for music ed majors requires its students to perform in instrumental and choral ensembles,” Earp said. “So, the Wind & Percussion Ensemble is vital to the music ed program’s prospects for success, as are Pfeiffer’s choral ensembles, which are already thriving under the capable leadership of Joe Judge ’87. I want people to see that the bands at Pfeiffer are the real deal. We’re going to do something with this.”

By “bands,” Earp also meant Freddie Falcon’s House Band, a pep band that has also begun rehearsing for its debut, which will take place during a Pfeiffer basketball game this winter. It will perform the University’s first fight song, for which Earp, also a prolific composer, is writing the music and lyrics.

Earp, a trombonist who holds a Doctor of Music Education from Liberty University, wants to sign up 10 music education majors at Pfeiffer for the 2022-23 academic year. In four years, if all goes as planned, that number would rise to about 25 or 30.

The Wind & Percussion Ensemble would increase from its current 13 members to between 35 and 50 members. Like Mila Rutter ’23, a junior environmental science major from Gold Hill, N.C., several of the group’s players will not major in music ed or music. Instead, they’ll continue to pursue music as a serious hobby, which would be consistent with a culture that encourages Pfeiffer students to participate in multiple extracurricular activities.

“I still want to play the trumpet, and I want to learn to play the drums,” said Rutter, who performed in the marching and jazz bands at East Rowan (N.C.) High School. “I do not plan to major in music, but I want to continue to play for as long as possible. So, the Wind & Percussion Ensemble has been great for me.”

Earp’s recruitment strategy will draw on his successful experiences during his pre-Pfeiffer days as a builder of instrumental music programs, first at Cox Mill High School in Concord, N.C. (2009-2017) and then at Limestone University in Gaffney, S.C. (2017-2021). He’ll plug the benefits of Pfeiffer’s culture as they relate to music ed: “One of the special things about Pfeiffer is that small school experience. When you walk into a band room, for instance, I’m going to know more than just your name. I’m going to ask how your classes are going, and I’m going to help motivate you to get things done for your classes.”

Earp will showcase his conductor skills as a guest assistant during rehearsals of high school bands he visits. This might mean coaching a band’s section or critiquing balances and other fine points of ensemble. In this way, prospective students will get a good sense of Earp as a teacher/conductor.

Earp wants to entice prospective students to Pfeiffer’s Misenheimer campus. One way of doing that is already happening: He’s recruiting ensemble members from the local community colleges and already has seven who have joined the group. Another way, which was also tried successfully during Earp’s time at Limestone, will be gathering the area’s better high school musicians in an honor band that rehearses and performs at Pfeiffer under a leading clinician.

“The likelihood that they’ll attend Pfeiffer dramatically increases if you can get them on campus,” he said.

Finally, Earp is working with other faculty and administrators on making the University’s music facilities more attractive to prospective music ed majors who visit its Misenheimer campus. One of the top priorities is enlarging the stage in Henry Pfeiffer Chapel, where the ensemble will perform, because it is too small for a concert band. Another priority is dampening the chapel’s too-lively acoustics with acoustical panels.

The new music education majors at Pfeiffer would be the first to graduate from the University since the spring of 2014, four years after the music ed major started being phased out (Pfeiffer’s Board of Trustees approved bringing back the music ed major at a meeting in June). They would leave the University as both generalists who are able to perform “any sort of job” in K-12 music and as specialists who have gravitated to one of three areas of music: instrumental, choral or elementary.

Earp is quite optimistic about the job opportunities for these graduates, noting that some areas in the region will need music teachers because new schools are being built to accommodate population growth. He also points out that there is always some turnover in teaching as well.

“There are a bunch of jobs out there and available,” he said. “I look forward to helping launch the careers of the next generation of Pfeiffer-trained music educators.”