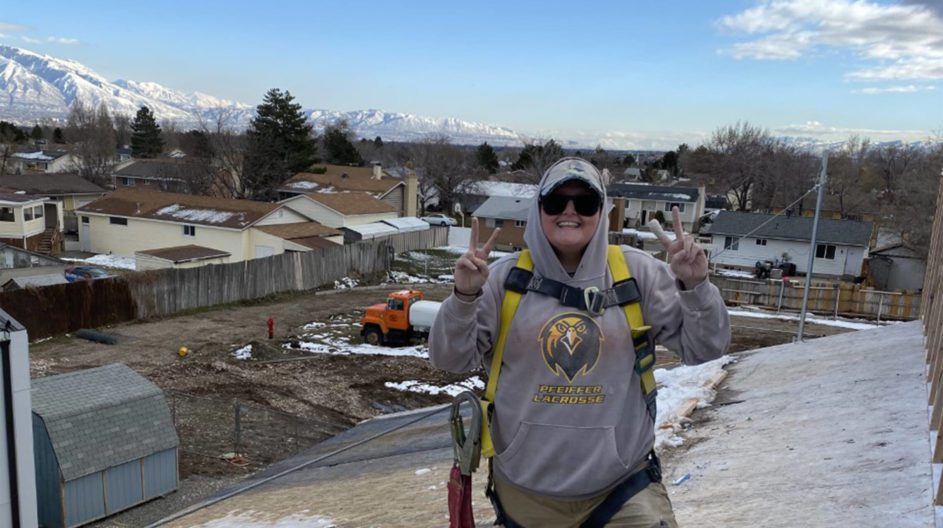 When Samantha Hanlon ’19 calls herself “a massive, insane advocate for mission work,” she’s probably not exaggerating.

Hanlon earned a Bachelor of Arts in religion and applied practical theology from Pfeiffer University. Since January, she’s been working for AmeriCorps as part of its partnership with the Salt Lake Valley Habitat for Humanity, for which she serves as a construction crew leader on a project aimed at building 10 twin homes over several years.

For the families that move into them, these homes will likely be the first houses they live in, the first that they own, and the first that offers a separate bedroom for each of their children. Hanlon knew these perks growing up in a house in Summerfield. Now, she’s helping make them a reality for others.

“That’s the appeal of doing this work – just knowing that I have played a small part in giving that to someone,” Hanlon said.

As part of her Habitat responsibilities, Hanlon teaches volunteers to tackle such tasks as painting, putting in roofs, and erecting walls. She acquired this know-how over several summer breaks as a project director for the home repair missions of Carolina Cross Connection’s summer camps in western North Carolina. She has also participated in Carolina Cross Connection’s mission program in Honduras.

Along the way, Hanlon discovered many reasons to give back through mission work. One such reason emerged a few years before she enrolled at Pfeiffer:

Hanlon’s father Bobby, who would die of cancer during her junior year in high school, had recently undergone surgery that confined him to a wheelchair. The Hanlons’ home had no wheelchair ramp. So, members of Oak Ridge United Methodist Church, where Bobby was a member, stepped in to build one.

“From that moment forward, the only thing I wanted to do with my life was to repay people like that and pass on the gift they had given my family,” Hanlon said. “I knew that I wanted to build stuff for people. I wanted to be able to use my two hands and put things together that would make somebody’s life better.”

In time, Habit for Humanity would emerge as the best way for Hanlon to do that, but the fact that her path to that organization ran through Pfeiffer means that she can bring additional insights and savvy to the job. For example, Rev. Dana McKim ’82, Pfeiffer’s chaplain during Hanlon’s freshman and sophomore years inspired her to embrace the idea that to love the people we serve through mission work, we must first endeavor to know them better. Hanlon’s efforts to know people better manifested themselves in courses she took outside her major, including ones on psychology and sociology.

She also undertook a critical examination of the impact of international mission work. This study, which would become the basis for her senior thesis, concluded that in many instances the people doing mission work end up harming the communities that they’re trying to help.

To illustrate what she meant, Hanlon cited an example of mission workers who build a well and leave for home. When the well breaks, nobody in the community knows how to fix it and everyone resumes walking five miles to get the water they need until mission workers return to fix the well. The better, more sustainable solution is to teach the community how to fix the well.

While Hanlon lauds Pfeiffer for its role in her development as a mission advocate, she is equally appreciative of the many ways that the university helped her surmount some challenges of her own.

While at Pfeiffer, Hanlon was not only grieving the loss of a parent but also dealing with both a disease and an injury. The disease, a likely precursor to lupus, is rheumatoid and psoriatic arthritis; it would flare up several times during her time at Pfeiffer and often force her to travel to Greensboro for treatments. The injury, which affects Hanlon’s back, happened between her junior and senior years of high school when she was playing softball. It prevented her from attending another university on a softball scholarship.

None of these issues would stop Hanlon from building and enjoying a full life, which included stints as a resident assistant, a student ambassador, a DJ, and a dealer for casino nights. That’s because she “benefited from our high-touch philosophy during her time at Pfeiffer,” said Paula Morris, Pfeiffer’s director of student involvement. “She definitely experienced support and accommodations that helped her succeed while she was here.”

A major part of that support was the Paul Ervin Annual Scholarship, which memorializes the former Pfeiffer trustee and board chairman for whom a residence hall at Pfeiffer is also named. The Ervin scholarship – which is funded by the Providence United Methodist Church Wesley Fellowship Class, whose members include trustee Al Rose ’63 – supports pre-ministerial students at Pfeiffer who are Methodist. Each scholarship recipient (along with Pfeiffer’s president) attends an annual prayer breakfast in December at Providence UMC in Charlotte and gets an opportunity to preach there.

Pfeiffer’s high-touch philosophy would touch Hanlon in many ways. When her meds made her really ill, for example, she could deal with that in the privacy of an on-campus apartment that Regina Simmons, Pfeiffer’s director of residence life, made available for her. Also, asked how the university might improve her student experience, Hanlon lobbied successfully for having her dog live with her on campus. This paved the way for other students to live with their dogs on campus – as long as such arrangements are in line with the terms of a dog policy, which Hanlon helped write.

Finally, although Hanlon couldn’t play softball at Pfeiffer, the nature of her injury did not keep her out of athletics altogether. She took up lacrosse as a sophomore and, remarkably, ended up playing goalie for three seasons on Pfeiffer’s women’s lacrosse team, which seldom lost. (Hanlon’s sister Aly ’23, a criminal justice major, now plays on the team.) Hanlon found that the sport helped her counteract the effects of her arthritis because it made her more limber. She credited Pfeiffer’s training staff with providing her the kind of treatments that enabled her to perform at 100 percent.

Best off all, the lacrosse team “became a second family for me,” Hanlon said. “It gave me lifelong friends, including the coach (Jenn Flaherty). It gave me an outlet and a community I craved.”

Hanlon, then, has a great story to tell about the impact of Pfeiffer on her life. For her, though, the story is a lot longer (and inspiring) than it initially appears. It begins not in her freshman year but in 2000, when her mother, Dana, earned a dual master’s degree from Pfeiffer in Christian Education and Children’s Ministries.

“Pfeiffer has been a massive part of our education,” Hanlon said. “We owe where we are today to what Pfeiffer did for us.”Ken Keuffel, who authored this article, has served as Pfeiffer’s Assistant Director of Communications since December 2019. He welcomes story ideas from Pfeiffer’s faculty, staff, students, alumni, and friends. The form for submitting story ideas is Story Idea/News Item Request Form.