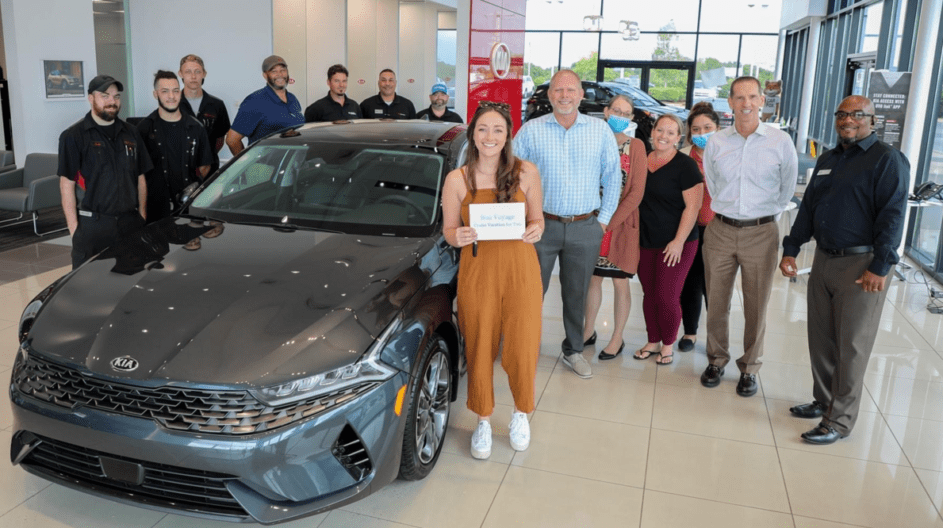 Teacher of the Year Hopes to Drive Change

Hannah Hill Park ’15, ’18 MSE, an alumna of Pfeiffer University who teaches third grade at Porter Ridge Elementary School in Indian Trail, N.C., is driving around in a new KIA K5 EX, a gift from Union County KIA. She has been promised another gift: a five-day, four-night cruise vacation, which she and her husband Payton plan to take over the Christmas holidays, and the Union (N.C.) County Education Foundation has given her $1,000.

“I’m so honored and excited to receive this award,” said Park, who holds a B.A. degree in elementary education and an M.S. degree in education from Pfeiffer. “It’s a great credit to everyone who has inspired and mentored me, including my professors in Pfeiffer’s Division of Education, my fellow Pfeiffer alumni, and my colleagues in the Union County Public Schools (UCPS).”

Park stood out for going “above and beyond for our children,” said Dr. Andrew Houlihan, the Superintendent of UCPS, who also praised her leadership, dedication, and commitment to Union County’s schools.

Dr. Laura Sawyer Lowder ’02, an Associate Professor of Education, was one of Park’s principal professors at Pfeiffer. She called being named Teacher of the Year in Union County, where Park grew up, a “huge honor” for her.

Park, a native of Monroe, N.C., was destined to teach and to be a self-described “forever student” of pedagogy. She is the daughter of a United States Army general whose travels took her to many places, each exposing her to a different school and culture.

She attended a magnet-based public high school in Monroe called Central Academy of Technology and Arts. She enrolled in Central’s Teacher Preparation Academy her freshman year and began observing in various educational settings. She also did some student-teaching: During her senior year, she led a fourth-grade classroom in Albemarle, N.C. under Kristie Green Bryson ’97, a Pfeiffer alumna who, like Park, majored in elementary education.

Bryson “taught me almost everything I know about being a good teacher,” Park said. “She is an amazing woman who guided me and treated me like her own. I truly cannot express how I will be forever grateful and indebted to her.”

The teacher preparation experiences were transformative for Park: “I knew teaching would become my lifelong passion.”

Also transformative was Park’s talent as a soccer player. After playing forward on a Central Academy team that won the NCHSAA Women’s State Championship her senior year, she caught the attention of Elijah Denton, then the head coach of women’s soccer at Pfeiffer, who offered Park a scholarship. She played four seasons on the women’s soccer team.

In 2011, Park enrolled in Pfeiffer, where she would flourish in the Division of Education. In addition to Lowder, two Professors of Education — Dr. Christopher Boe and Dr. Ann Benson Crutchfield ’77 — “supported, encouraged and challenged me every step of the way. They instilled in me a sense of self-confidence,” Park said.

The research that Park began at Pfeiffer remains an ongoing pursuit that  informs her teaching. She’s adopted several cutting-edge instructional strategies in her classroom, including  scaffolding instruction; teacher clarity, which she illuminated at a conference for beginning UCPS teachers; and various forms of metacognition, aka “thinking about thinking.”

She supports interleaving: “Rather than asking students to retrieve similar types of information in one continuous session, apply the principle of interleaving, which mixes up content from different areas.”

Park is a big proponent of mindfulness, the practices of which are gaining ground in the classroom. Through mindfulness practices, elementary students can improve their concentration, manage stress and develop more empathetic responses to others.

As a master’s-level student at Pfeiffer, Park researched the effects of implementing mindful movements into the weekly schedule of a collection of third-grade students. She says the research showed that such practices both benefited the students’ health and wellbeing and contributed to their academic success.

Park wants to take her cutting-edge thinking to the next level by becoming an advocate for educational reform. She hopes that her Teacher of the Year award will help “open doors for me to get out of the regular classroom setting and move into positions where I can make a difference” at the county, state and federal levels.

She wants to help end what she sees as “outdated” and “ineffective” policies, particularly the “pressure to produce high test scores that lead to a teach-to-the-test approach and reduced focus on non-tested subjects like art.”

Moreover, AI and related technologies have reduced the need for a curriculum heavy on repetition and memorization: “For our students and our graduates to thrive in the age of smart machines, it is essential that they not compete with machines. Instead, they need to be more human.”

Park stressed that she does not have all the answers but that “tough discussions” must begin to find them. Until then, her Teacher of the Year honor, which is rooted in the fine education she received at Pfeiffer, will be an asset as she starts “spreading the word to help people, especially our elected officials, see that we are educating our youth in an outdated format.”