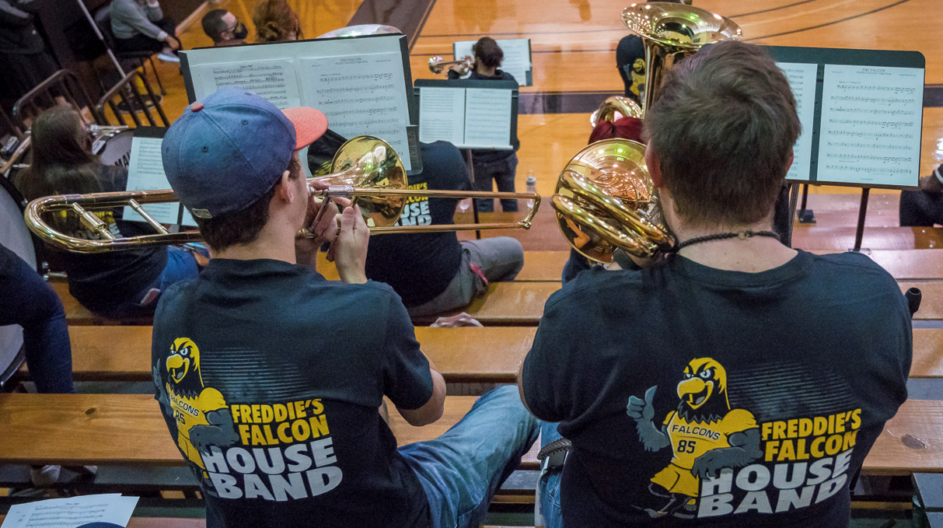 Fans of Pfeiffer sports can now sing something of their own as they cheer on the University’s teams.

Dr. Joseph Earp, the University’s Director of Instrumental Music, has written the music and lyrics for “The Falcon,” the University’s first-ever fight song. On Nov. 2, he conducted the Pfeiffer University Wind & Percussion Ensemble in the song’s premiere, with baritone Joe Judge ’87 singing its words. Pfeiffer’s Student Government Association adopted “The Falcon” as the University’s official fight song earlier this month, and “Freddie Falcon’s House Band,” the University’s pep band, has been performing it at basketball games.

“The Falcon” grabs listeners with a catchy melody and sizzles with the up-tempo peppy beat for which most University fight songs are known. The lyrics in “The Falcon” urge Pfeiffer sports teams with “black and gold our colors bold” to “fight for that victory,” and there’s a section of the song calling on the crowd to chant: “F-A-L-C-O-N-S.”

You can familiarize yourself further with “The Falcon” by watching a recently released YouTube video starring Earp, the Wind & Percussion Ensemble, and Judge, who also serves as Pfeiffer’s Director of Vocal and Choral Music. Freddie Falcon, the University’s mascot, struts rhythmically around campus as the music is played.

Earp, a prolific composer of music for concert bands, has written multiple fight songs for schools that employed him before his Pfeiffer appointment. He said that he wrote “The Falcon” with the strong encouragement of Dr. Daniel Mynatt, Pfeiffer’s Provost and VP of Academic Affairs. Both men began working at Pfeiffer last summer and learned early on that Pfeiffer lacked a fight song.

Earp said that for now, “The Falcon” will be played at basketball games, along with such “stands” tunes as “We Will Rock You” and “Seven Nation Army.” He’s exploring the possibility of having performances of “The Falcon” featured at high-profile non-athletic events of the University as well.