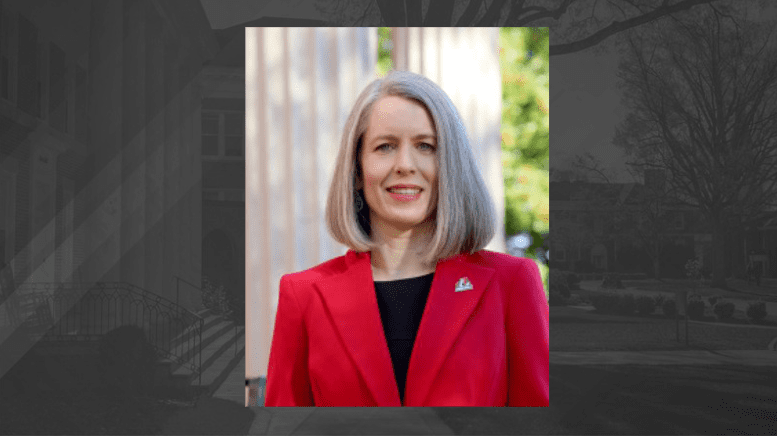 I am who I am today because of the transformative power of my undergraduate college experience, and because of one professor who saw potential in me — and who took the time to nurture it.

Dr. Susanna Baxter ’96 wrote these words on the website of LaGrange College in LaGrange, Ga., where she began serving as its 26th President in June 2020. Her inauguration took place on April 22, having been pushed back because of the COVID-19 pandemic.

Baxter’s undergraduate college experience unfolded at Pfeiffer University, where she earned a bachelor’s degree in Christian education and religion. The “one professor” was the late Dr. Robert H. Conn. He held the Mariam Coltrane Schramm Distinguished Professorship of Religion at Pfeiffer, in addition to serving as the head of its Department of Religion, Philosophy and Christian Education.

“Anyone who’s around my graduation class will remember Dr. Conn because he always ate in the cafeteria with students,” Baxter said in a recent interview before her inauguration. “You wanted to rearrange your schedule to have classes with him. He had a very engaging teaching style, and students really enjoyed him. Philosophy was his specialty, so regardless of what he was teaching, he offered a you’re-getting-philosophy-whether-you-know-it-or-not kind of class.”

In Conn, who became Baxter’s faculty advisor, she also found that special mentor who could help her get to her ultimate destination, namely a multifaceted career in higher ed administration — even if the road to it was paved with uncertainty and navigating course corrections became necessary at times.

“I have a picture of Dr. Conn in my office,” Baxter said. “He was that impactful to my life.”

Baxter vows that students at LaGrange will enjoy similarly positive life changes as a result of their time there. Like Pfeiffer, it’s a small United Methodist-related institution and the oldest private college in Georgia.

Baxter is married to Mark Huffman, a self-employed consultant in organizational development, and the couple has two sons, Inman and Wade. She compiled a formidable resume before filling her current position. She had done graduate work at Vanderbilt University, where she earned a master’s degree in general administrative leadership and a doctorate in higher education policy. “You’re going to Vanderbilt,” Baxter recalls an “influential” Conn telling her as she was struggling to decide which graduate program to attend.

In addition to beginning her career as an administrator at Barton College in Wilson, N.C., Baxter served as President of the Georgia Independent College Association (2010-2020) and as Chief Operating Officer of the Tennessee Independent Colleges and Universities Association (2000-2010). At one point, Baxter counted the number of colleges she had worked with during her time at the associations.

“I want to say it was over 60,” she said. “What that meant is that I could observe and gain a deep understanding of how systems and organizations work. Even now, when an idea comes up or we’re struggling with an issue, I can say, ‘Some campuses do it this way, or other campuses do it that way.’”

When Baxter arrived at Pfeiffer, there was no indication that leadership in higher education would become her calling. A lifelong United Methodist, she had been quite active in the conference-level youth leadership circles of her church.

“I was comfortable in that space,” Baxter said. “But I wasn’t comfortable with the rest of me.”

She was also unsure of herself, and she didn’t yet understand the power of her voice, much less how to use it.

“Pfeiffer taught me how to use my voice,” she said. By this, she meant that she developed skills that she draws on in her current job, such as how to tell a story, communicate a point, or make an impression as a public speaker (she soaked up a class on public speaking).

Baxter’s initial plan at Pfeiffer was to train for a career as a Christian educator. It wouldn’t take long for her to change her mind, and Pfeiffer was a major reason.

“I had fallen in love with college,” she said. “I thought, ‘I could work at a college. I could make this possible for other people.’”

The only question was how. Other than the fact that Baxter had no grand visions of becoming a college president when she attended Pfeiffer, a world of seemingly limitless possibilities had emerged. Would these be in the classroom? Or would they be in administration?

“I could give voice to Dr. Conn about what I was thinking about,” she said. “It felt scary to cast dreams, and I really came to value his guidance.”

Initially, Conn felt Baxter had a future as a theology professor and encouraged her to pursue that path. “By the time I was 20 or 21, however, I came to terms with the fact that I was an administrator at heart. So, I talked to Dr. Conn about that,” Baxter said.

Along the way, Conn and his colleagues made sure that Baxter “had had a lot of different experiences” at Pfeiffer, experiences that could help move the needle out in the work world. These ranged from participating in student government to working as a resident assistant and a resident director. She was also heavily involved in Pfeiffer’s religious life.

“I was afforded leadership positions that I probably wouldn’t have had at a larger school,” she said.

Writers are often encouraged to “write what they know”; Baxter decided she would try to do what she knew as she pursued her first job. This was the Dean of Students position at Barton, and for Baxter, it was a great fit since she had been so involved in resident life at Pfeiffer.

As Baxter contemplates her goals for LaGrange in the years ahead, she mentions a just-completed strategic plan and talks about where she’d like the college to be in the next five or 10 years.

“Some sort of campaign will come out of that plan, but that’s not been clarified yet,” she said. “If you were to interview me in five years, I think you’d hear me say that our enrollment has increased, that we have more graduate programs, and that we have deepened our town-gown relationship and our ties to the community.”

And like Pfeiffer, which gave Baxter such a promising start in life, LaGrange will still tout its calling card as a place of transformative experiences.

“Our students are being well-served, and we’re a very student-centered campus.”