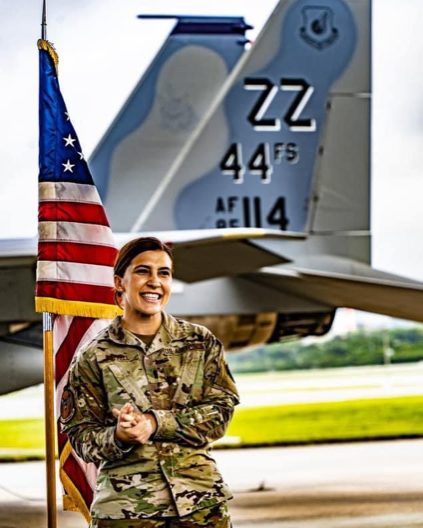 When Devin Nicole “Nikki” Duffell ’16 graduated from Pfeiffer University, she had a lot to show for her experience on its Misenheimer campus, both academically and outside the classroom. But as her time at Pfeiffer began to wind down, she wasn’t sure what her next move should be.

So, in June 2017, she was commissioned a Second Lieutenant in the U.S. Air Force, having been accepted into its Officer Training School, a highly competitive program. She was recently promoted to Captain, and she serves as the Officer In Charge (OIC) of an F-15 Strike Eagle Aircraft Maintenance Unit at  Kadena Air Base in Okinawa, Japan. She plans to leave the Air Force in July 2022 and then pursue a BSN degree in nursing. The GI Bill will cover her tuition bill, a benefit of her military service.

“I knew when I joined the Air Force that it wouldn’t be a life-long career for me, but I wanted the experience and chance to serve while I figured out what I wanted to do,” Duffell said. “I also saw it as a way to challenge myself, gain unique experience, and be a part of something bigger than myself. I wanted to continue to be a servant leader (a pillar of the Pfeiffer experience), and joining the military was the perfect way to do it.”

At Pfeiffer, Duffell did some things that showed she was officer-level military material. She earned two degrees, a B.S. degree in biology and a B.A. degree in psychology, with a minor in mathematics. During her junior and senior years, she served as a Resident Advisor, a job that helped her “gain leadership experience and really understand what it was like to work as a team and build relations.”

Duffell, a first-generation college student, grew up in a “low-income household” not far from Pfeiffer in Salisbury, N.C. During family trips to the coast, she would pass through Misenheimer and think, I want to go to school here someday. Her parents were on board with that idea, having their daughter prepare for such a possibility at Rowan County Early College High School at Rowan County Community College.

Duffell can point to many highlights of her time at Pfeiffer, the RA experience chief among them. There were also at least two positive intangibles that would stick with Duffell for good.

First, professors and staff members were always there for her when she was going through a personal struggle: “I could always count on them to provide guidance and care in a desperate time of need. The bonds you build at Pfeiffer are truly special, and it really is like a home away from home.”

Second, she gained the kind of confidence she needed to apply for commissioning in the USAF: “I was more than a number at Pfeiffer. I was able to stand out in ways that encouraged me to keep striving for more for myself in life and in my career.”

Paula Morris ’17 MSL, the Director of Student Involvement in Pfeiffer’s Office of Student Development, befriended Duffell when she attended Pfeiffer and became one of her most enthusiastic supporters.

“I didn’t encourage her to enlist and was a little surprised when she did so,” Morris said. “However, I’ve not been surprised at all with how she has risen in rank and responsibility. Nikki isn’t a large person in stature, but she was always able to give and command respect from her peers as an RA while here at Pfeiffer. I think that translated well into her leadership roles in the Air Force.”

As an OIC, Duffell oversees the scheduled and unscheduled maintenance of all aircraft in her unit, providing status reports to her Group Commander. This makes her an important link in daily flying schedules and the 298 Airmen involved in them. Each day, there are numerous “curve balls” to contend with, meetings to attend, and paperwork to complete.

“We provide war-ready aircraft at a moment’s notice to the pilots that fly and carry out the mission daily,” she said. “Managing the fleet and people is a hard task and there are many intricacies involved, some classified. We are in a critical area of the world and must be prepared at all times.”

As Duffell’s stint in the military comes to a close, she is preparing for the next chapter of her life by attending an Air Force-sponsored Transition Assistance Program.

She is taking stock of how her service overseas has broadened her horizons on a personal level: “I didn’t travel outside of the country growing up. So, living in Japan has been an incredible experience, full of growth.”

And she is evolving as a role model, particularly for Pfeiffer alumni who feel the pull of the military because, as Morris said, the “mentorship and continued learning opportunities available in the various branches of service marry well with the things that make the Pfeiffer Journey so unique.”

Many women from Pfeiffer and Rowan County Early College High School have asked Duffell whether they should serve. Her advice is always the same.

“Think long and hard about what you want and why you want it,” she tells them. “Be prepared to fully commit to the military during your time serving because the military will ask a lot of you and you need to be prepared both mentally and physically to answer the call.”

Duffell hopes that she has empowered both women and men to step outside of their comfort zones and challenge themselves.

“Being in the military has given me so much pride,” she said. “I hope that others can be inspired to get after their dreams, whatever they may be.”