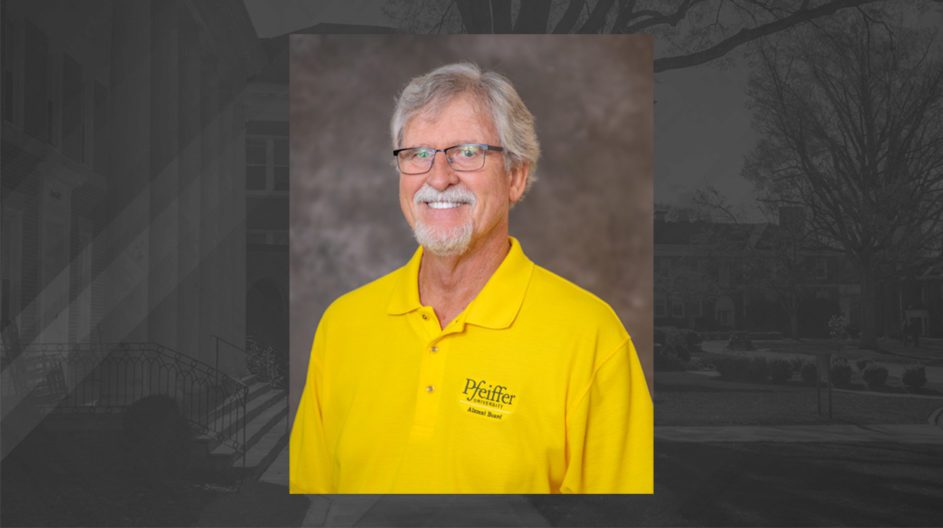 When David Bell ’74 was a rising senior at Chesterfield (S.C.) High School, he attended a conference on human relations sponsored by the service organization Civitan International. Several students from Pfeiffer College served as counselors at the conference, and before long, they were talking up their school.

Bell was excited by what he heard, having already learned of Pfeiffer from an alumnus he knew, and he eventually visited the College’s campus in Misenheimer, N.C. “Through those experiences, I found that I really liked the College,” he said recently. “It was small, which I was interested in, coming out of a small high school. I ended up thriving there.”

As the new President of the Board of Directors of Pfeiffer University’s Alumni Association, Bell wants his fellow alumni to plug their alma mater with the same kind of zeal that those students did at the Civitan conference.

“There are lots of opportunities for alumni to reach out to prospective students at high schools and talk to them about Pfeiffer,” he said. “We are working on expanding that sort of outreach so that alumni can easily help promote the University.”

Bell, who lives in Greenwood, S.C., majored in economics and minored in biology. When he talks about his student days at Pfeiffer, he has plenty of positive recollections, from learning about economics from an egg farmer’s point of view to serving the College Union Board (now the Campus Activities Board) as its Entertainment Chair. In that capacity, he booked such artists as The Guess Who, Billy Preston, Helen Reddy, Goose Creek Symphony, Black Oak Arkansas, Hall & Oates, and Harry Chapin. He wrote press releases for Pfeffer’s athletics department, and he covered sports for The Pfeiffer News.

Pfeiffer provided a solid foundation for the rich and varied work life that Bell enjoyed after graduating. Between 1974 and 1980, he taught science in the public schools of the South Carolina counties of Chesterfield and Spartanburg. After that, he embarked on a 37-year career in commercial banking, retiring as a Senior Vice President responsible for commercial banking at Countybank in Greenwood. He’s now in his fifth year of teaching economics and corporate finance as a lecturer in the College of Business at Lander University in Greenwood.

Along the way, performing country music on his guitar became a sideline for Bell. His most recent CD, from 2020, is titled Waiting for the Setting Sun.

Bell, also an ex-officio member of Pfeiffer University’s Board of Trustees, stressed that there are numerous ways for alumni to stay engaged with Pfeiffer, from reconnecting with former classmates at various gatherings to attending events on campus. If Bell’s situation is any indication, it’s never too late to reestablish ties: Around 20 years had passed before he began attending Homecomings each year, which laid the groundwork for his current involvement with the association. He called it “great fun” to not only reconnect with students in his graduating class but also to become better acquainted with alumni who were years ahead or behind him at Pfeiffer.

Bell wants to expand opportunities for alumni to gather. He’d like to see an increase in the percentage of alumni who make donations.

“Financial support is extremely important, not only the dollars themselves but the message it sends to major donors who want to know about the return on their investment,” he said. “Community impact by Pfeiffer alumni demonstrates great value, but gratitude for the Pfeiffer experience shown simply by participating as a donor – no matter what the amount – is additional proof that Pfeiffer is highly regarded by its former students and is making a meaningful difference in the world.”