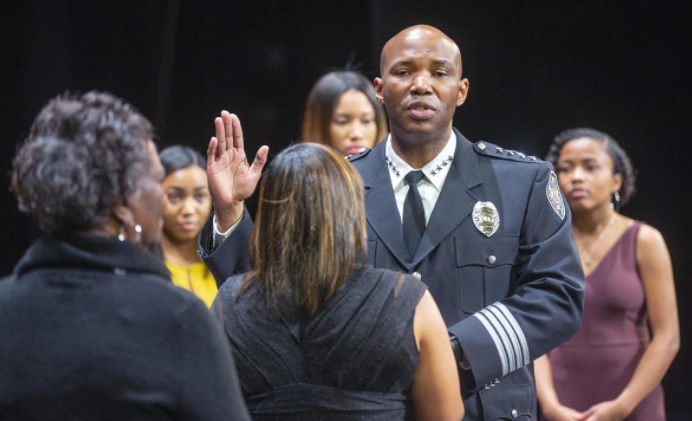 When Brian James ’07 MBA became the 23rd chief of the Greensboro Police Department in late January 2020, residents of Greensboro, N.C., cheered for one of their own pictured here in the News & Record local paper.

James, a graduate of both Page High School and North Carolina A&T State University, had given back to his native Greensboro by pursuing a career on its police force. And now, he would lead that force, having become responsible for all operations in a department with a $78 million budget.

His promotion could be attributed to lots of factors. One of the most important was his decision, in 2006, to pursue a Master of Business Administration degree from Pfeiffer University. He did so because the trend lines were clear: If you wanted to attain leadership positions in policing, an MBA was becoming a prerequisite.

“I would say that an MBA is even more expected today,” James said recently. “Even 30 years ago, you were hard pressed to find anybody in law enforcement with a graduate degree and a lot of people, even police chiefs, didn’t have a college degree. Certainly, the expectation around education has increased.”

The MBA program “gave us the ability to look at the business side of police work,” James said. “People think of police work as enforcing laws and protecting citizens. But, at the same time, you have to pay people, you have to buy cars and equipment, and you have to deal with legal issues.

“So really, an MBA gives you more insight on the business side of running any municipal department, which includes the one for police. It’s certainly helped me to progress through the department.”

James knew that when it came to MBAs, Pfeiffer wasn’t the only option in the area. For him, Pfeiffer’s program got the nod because it offered him and his fellow officers perks that set it apart during a time when in-person instruction at universities still dominated. Instructors came to Greensboro to teach classes in a training center the police and fire departments shared.

James, who was working in an investigative unit at that time, would get off work around 5 p.m., grab a quick dinner and drive to class, which started around 5:30.

In addition to its convenience, Pfeiffer’s program also favored content and teacher perspectives that spoke to real-life scenarios. James’ courses on statistics and accounting still provide the kind of foundational knowledge that helps him budget for his department’s top priorities.

He expressed appreciation for the fact that many of his professors had real-world experience. One professor, Don Steger, was an Assistant City Manager for Charlotte, a position responsible for public safety.

Steger “was able to take a lot of those lessons in class and relate them to real life situations,” James said. “And that helped me link what we were learning in class to what I was doing or could do at a police department.”

James was 36 when he pursued a Pfeiffer MBA and says he hadn’t taken a challenging college course in 13 years. It took him a little time to adjust to the rigors of an MBA program, yet he always felt that he would make it.

“The instructors challenged you,” he said. “None of the material was easy. But you always had the support of the instructors, who were easily accessible if you had to get in touch with them to get some help.”