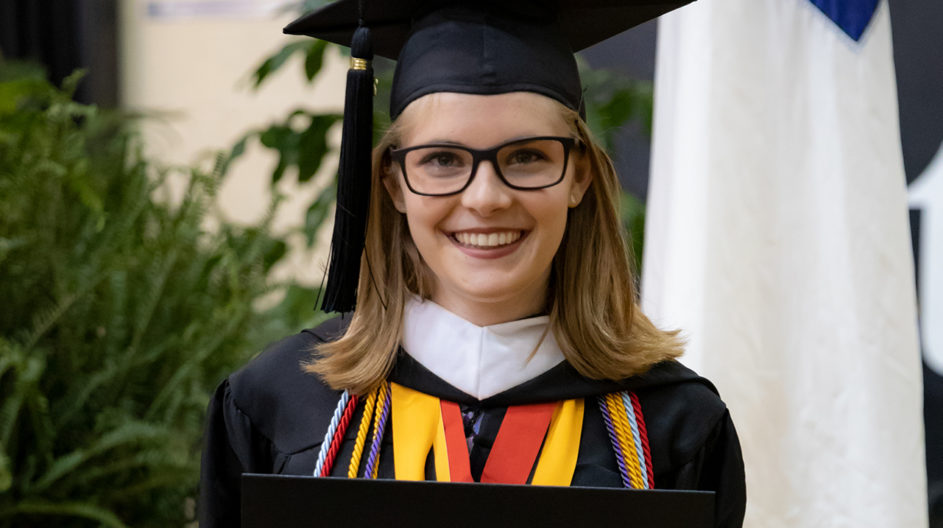 It can be a bit difficult to connect with Pfeiffer University alumna Alyssa Queen.

That’s because Queen, who graduated in May with a degree in religion and practical theology and a minor in history, is currently in Jerusalem – a city seven hours ahead of Eastern standard time, with an international calling code – studying Hebrew.

“Since I was a little girl, I have wanted to study the Bible in its original language,” Queen said. “I love studying Hebrew.”

The seed for her sojourn in one of Israel’s holiest cities was planted when she was young: Queen said she “grew up with church.” She felt a strong call to ministry as a junior in high school and pursued that call at Pfeiffer, where she appreciated the university’s integration of academia with practical knowledge.

Queen originally planned to graduate from Pfeiffer in December, work for 9 months, then attend graduate school.  She credits Douglas Hume, an associate professor of religion at Pfeiffer, for her ultimate decision to attend Hebrew University in Jerusalem.

Hume oversaw her junior research project – about the archaeological support, or lack thereof, of the Israeli conquest of Jericho, as told in the book of Joshua –  and encouraged her to pursue her interests in research and Hebrew scriptures.

“He saw my passion for the subject,” Queen said. “I would not be in Israel studying if it was not for the mentorship and support of all my professors at Pfeiffer.”

For the first three weeks of her program, from 8:30 a.m. until 1:30 p.m., Sunday through Thursday, Queen attends an intensive Hebrew class where she learns the Hebrew language.

In the first week, Queen learned how to write, “Pfeiffer is home.” She also counts as a “language milestone” the first day she signed her name in Hebrew on a grocery store receipt.

But Queen admitted her Hebrew skills have a long way to go.

“I don’t want to give you the wrong idea,” she said with a laugh. “My Hebrew levels are that of a 7-year-old right now. Here, with 5 hours of class a day, it took us a week to learn the alphabet.”

But, she added, she’s now proficient enough in the Hebrew alphabet that she can follow along when the synagogue’s members sing from the Torah –  an experience she described as both “powerful” and “surreal.”

“That has been a dream of mine for literally as long as I can remember,” Queen said. “It has been amazing to begin to understand more and more as I am in synagogue or while I read the Hebrew scriptures or prayer books.”

Queen also has picked up some new habits from her time in Jerusalem, including the observance of Shabbat.

“Part of the Jewish tradition is to not use any technology or do any work from sundown on Friday to sundown on Saturday,” Queen explained. “I have done that since I have been here, and it has been incredibly restful and rejuvenating.”

Though enjoying the light-hearted fun of learning a new language and culture, Queen is not one to shy away from depth or darkness. Early into her ministry experiences, she decided that speaking about faith with others required safe space and an “open door policy.”

“I love entering into difficult conversations about faith,” she said. “Nothing should be off the table for conversation. I believe that growth happens and God can be experienced when you allow people to ask the questions that they are already thinking.”

During her religious studies at Pfeiffer, Queen also found herself increasingly drawn to what she termed “problematic” passages in the Bible, such as Joshua 6, a passage that details the raid and destruction of Jericho, which she described as “pretty violent.”

“People tend to avoid the violent texts that make them uncomfortable,” Queen said, “and to me that poses an interesting question.”

The question, for her, has been how to use the texts in a “helpful and healthy way” instead of the texts “being abused” to justify violence or to otherwise be ignored when they make people uncomfortable.

During her time at Pfeiffer University, Queen also served as a facilitator and trip leader for the Center for Outdoor Leadership, as a tutor at the Wick Sharp Learning Center, and president of Pfeiffer’s chapter of “It’s On Us”- a national campus sexual assault awareness campaign. She also belonged to the Phi Alpha Theta National History Honors Society and the Phi Delta Sigma Scholastic Honors Society and ran for the university’s NCAA Division II cross country, track and field teams.

Immediate plans for the world traveler include finishing up her studies at Hebrew University, visiting friends and family in Ireland and Germany, then helping facilitate the summer session of Pfeiffer’s Youth Theological Institute.

In September, Queen plans to pursue dual master’s degrees in divinity and Christian education at Princeton Theological Seminary, where she was awarded a full-tuition scholarship.

“I’m not entirely certain about the future, but the next 4.5 years I have planned,” she said. “I know I somehow want to merge education and religion.”

But first, she returned to Misenheimer to accept her Pfeiffer University diploma in person.

“Even though it would certainly have been easier to finish the semester in Jerusalem, I don’t want to miss that seminal moment in my life,” Queen said. “I want to celebrate the time I spent at Pfeiffer, with that community.”